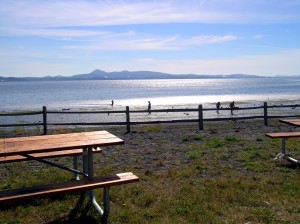 It was a breezy summer afternoon. The oak tree branches resembled huge fronds, lifting, swaying and fanning the air below. I watched a father make a wooden swing. He smoothed and sanded the rough edges, and painted the swing soft white. He pulled the knotted yellow rope through the holes that he drilled out and he patiently tossed the long loose ends over the large tree branch above, over and over again, until he was able to snug up the rope to hold the swing. For nearly an hour, he gently pushed his young son, up down, up down, in the shade of the old tree. My heart warmed at the sight. I knew that boy would remember the day his father stood beside him. Dad took the time to be with his son. He created a memory infused with love.

My father was stationed locally one summer. This meant he joined us in the backyard after dinner to partake in family games. I still think he and my brother cheated at softball, so I’ll elaborate on badminton instead. Keep in mind, I know nothing about the game except for hitting the birdie over the metal swing set, and bending over in sheer laughter as my father rushed back and forth to swing his racquet and whoop the birdie back. When he ran, while normally still attired in his US Army pants, his pockets jingled. Chink, chink, ca-chink. My father always had a pocket full of change. He said, “You just never know when you will need money.”

Do you know how to keep snakes from coming ashore? You throw everything you have at them. I know this, because my father taught me so. We were fishing. It was early spring. An entire family of young snakes had a better idea than we did, our intentions were to lazily fish the day away. The reptile family decided to join our human family while we stood with fishing poles in hand. I am not a snake lover, so I dropped my pole and distanced myself from the water’s edge. My father proceeded to throw parts of his lunch, empty packages, you name it, at the small snakes, thinking they would turn away. He swung his pole into the water, slapped it around, and to this day I the believe the snakes enjoyed dad’s little game. As much as I hate slithering live things that have no appendages, I was again bent over in side-splitting laughter. My father’s snake repelling attempts were unsuccessful. We moved what was left of our quiet family picnic fishing party to a spot where no snakes came to visit.

I spent many days in the parking spot behind our townhouse as a young teen while my father earned extra cash working on neighbor’s cars. Those were the days before we needed computers to analyze automobile issues. Dad would line up his tools in neat rows as he explained the intricacies of car parts and tools, “Because, someday you might need to know things about an engine.” Perhaps this is why I am not one of those women that ignores sounds coming from under a hood that aren’t indicative of a healthy car.

When we lived in Baltimore, around the same time frame as the make-shift car repair days, he delivered advice, such as. “When you are driving, you always look ahead. Do not just watch the traffic right in front of you.” Each time I drive in Central Texas, I am always on the watch for a bottleneck on the interstate, which is a frequent event, and it nearly goes without saying, I hear my dad’s words, “look ahead.”

When my father was home on leave, he appreciated the chance to cook. He arrived home from the store with paper towels and several other necessity items, “You don’t run a home without these things.” Then, he fired up a large batch of chili. Dad did tell me many times to make sure I did not try to save money while ignoring the necessary things in life. He was not pleased when I bought the small car for my large family, without air conditioning. Nor was he pleased when I bought the small house with the washer and dryer hook ups right in the middle of the kitchen, in the center of the home where they loudly competed with television and conversations. His words were, “Who buys a house like that?” Me.

My father always told me, “You are a lucky girl. There aren’t too many people who can say you’ve seen the places that you have seen in your lifetime.” He prided himself on that, on the traveling. I never told him that I had a hard time when I couldn’t make long-term friends. Army friends were the best, though – black, white, yellow – from everywhere. We loved. We laughed. We watched over each other. We were true neighbors!

Fathers – your children, your daughters, your sons, will always remember the little things. If your daughter smiles 40 years from now when she sees visions of you chasing the birdie that she worked so hard to shoot across the back yard, with pockets jingling each time your feet make contact with the ground, it is time well spent.