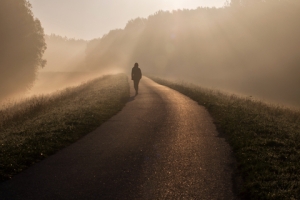 We were leaving the parking lot when I noticed a large white handbag laying on the grass next to the curb.

“Stop, stop, stop! There’s a ladies purse out there!,” I said to my husband as I pointed out the window.

He stopped the truck.

While I called the management at the front desk, my husband carefully peeked into the purse without picking it up.

The response I received over the phone from the employee, along with a metropolitan police officer standing in attendance by his side, “Yeah, we know. It’s been there for days. I suppose everyone’s afraid to open it (insert their laughter here).”

I tried once again. I told the employee, “There are belongings in the purse, including a ring of keys.”

His response, “Oh yeah? Perhaps I should have someone take a look,” followed by another round of laughter.

I could not find the humor in it, and even though it has been weeks, I still struggle.

That day, a hundred miles away from the location of the purse, we stopped for a few minutes. I spotted a pair of on-duty police officers and asked them if they had a moment.

The police officers laughed after I told them my story, with one of them saying, “You must have found the purse in (…..) location, I am not surprised.” They obviously did not understand my concern, not that they could have done anything about it from that distance, but I wanted to hear someone say the situation should not have been brushed off. That was not said. In fact, every person that I have mentioned this entire incident to has laughed. The humor in this eludes me.

Who was the woman? Was she a victim of crime? Is she missing?

I cannot rid myself of the image I have of a woman shopping or filling her car with gasoline as her purse is grabbed from her side. All of a sudden her identity is robbed. She may not be able to start her car and drive home. She may not be able to unlock her door when she does arrive home. Photographs of her children might have been tucked into her wallet—now they are forever gone. The simple things, like her hairbrush and makeup, can easily be replaced, but worse images have crossed through my mind. The thoughts have to stop.

Today, I move on. I did my best. Whoever you are, the owner of the pocketbook and belongings, I tried. I pray that you have also moved on from the trauma that you experienced.